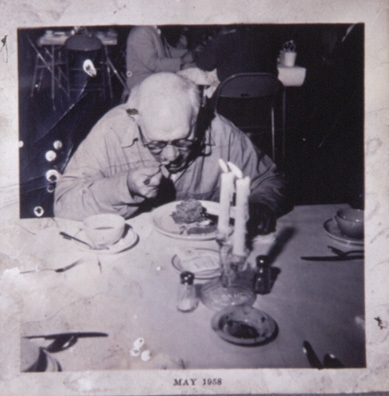 The skeleton of American popular culture we’ve grown accustomed to in comics and advertisements is given flesh and blood in the Realms of Unreal. Seemingly so familiar, the images yet perplex and elude, their unsettling strangeness haunted by Darger’s delusions. While people create art in the passage back and forth between the everyday reality and imagined unreality, in Darger’s case the two were inseparably conjoined. Rather than dwell in the merciless emptiness of reality, he added a rich succor of imaginings to his circumstances, and lived his Realms of Unreal within the confines of his room.

Keizo Kitajima was born in 1954 in Suzaka (Nagano Prefecture), Japan. He began photography at an early age; his discovery of the precursory works of Nobuyoshi Araki and Daidō Moriyama marked his teenage years. He was an original member of the Workshop Photo School. Like Moriyama, Kitajima developed an interest in the creative potential of photography’s reproducibility, but he took the notion of transformation in a very different direction, focusing on the layers of reproduction in his own work rather than the degeneration of cultural media.  Kitajima’s photography is haunted by an obsession: identity, or rather the opposite; what Kitajima himself calls un-identity.