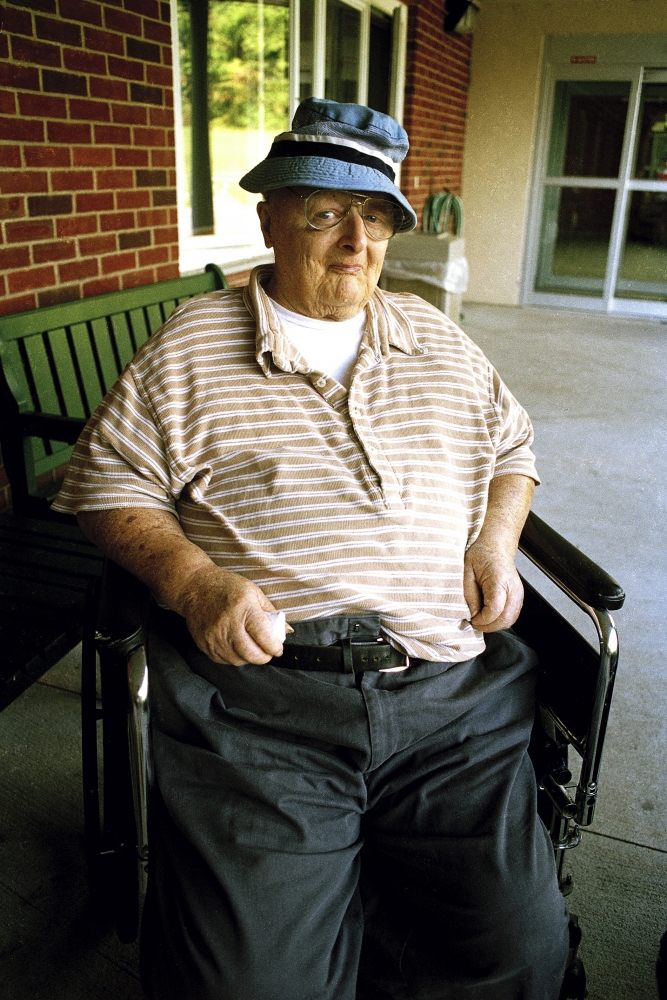 In 1929, John Byam was born in the “city of the hills,” Oneonta, NY. He lived and worked at the local trailer park owned by his parents until the 1940s when he subsequently worked for the D&H Railway. During the Korean War, he was stationed in Japan for two years, and then returned to Oneonta in 1952 continuing his duties as a trailer park attendant and taking a job as part-time gravedigger. In 2013, he died in a nearby assisted living facility. His first New York exhibition had opened only weeks before. The Daily Star wrote for his obituary, “He was an interesting and most unusual man. There are no immediate survivors.”

What does survive him are the many carvings, signs and drawings he made in his freetime. This odd assortment of buried treasure was discovered in 1998 by antiques dealer Neil Rochmis, who comments that Byam “didn’t see [these] as art.” Byam obsessively wrote in the margins of his drawings some iteration of this humble message: “A Hobby is to Draw Pictures.” While Byam’s small wooden sculptures are well-known to outsider art audiences with exhibitions at the Collection de l’Art Brut in Lausanne and the American Folk Art Museum in New York, his drawings have remained relatively unknown.
Drawn by I John Byam reveals eighteen never before seen pen and pencil drawings that provide a glimpse into the life of this “most unusual man." Scrawled in a steady hand, the quick drawings document the day’s mundane events and annoyances, overheard jokes and memos, and the people and places in Byam’s life.

Stemming from his experiences serving in Korea and from popular culture images, Byam often depicts war scenes ranging from machinery and guns to soldiers. His self-portrait is surrounded with the thought bubbles of a young war-bound man–the rapid swearing in, the demanding Uncle Sam, the departure from a now distant “Pop, Ma, Pet Dog, Pet Cat.” In light of this picture of youth, the celebrity of General MacArthur, who advises a graceful fade away at the end, strikes an ominous chord.

Similar to artists like Pearl Blauvelt, Byam depicted (and carved) interior spaces and furniture with copious amounts of labeling and a flattened perspective. Themes of containment and control come to mind with a teacher leaving the dunces in the corner and a "meanie" looking over Mr Joe Smith watching TV.

While we are unclear as to his relationship with Byam or even of his existence, Mr Bojo frequently appears in Byam’s drawings as a “head shrinker” psychiatrist of very questionable standards. Describing him as “a preacher without words" and emphasizing the superficiality of his head (or intelligence), Byam likely abhorred this figure Mr Bojo. While no public record exists of Mr Bojo’s existence, Byam had a specific idea of his appearance. If the depiction of Mr Bojo was not accurate to his memory, Byam would write in the margins “recopy” and “draw again.”

As is the case with his Mr Bojo drawings, Byam had a particular idea of how his portraits should appear. When drawing people from his daily life or celebrities from television and newspapers, he added notes to himself when the final product needed to be redrawn or when it was “as near as can be, 1st time drawn.” Harkening back to his view that his art was merely a “hobby,” the drawings speak to an ongoing tinkering process that lends an ephemerality to the works. There are even instances of him recognizing a new figure in the drawing midway through as is evident with The 3 Stooges / Planet of the Apes. What began as a representation of the comedic trio Larry, Moe and Curly-Joe ends as a picture of the primate science-fiction classic. Byam’s transitory works display a humble instinctiveness paired with ever-present autobiographical remarks, “Drawn By I John Byam.”